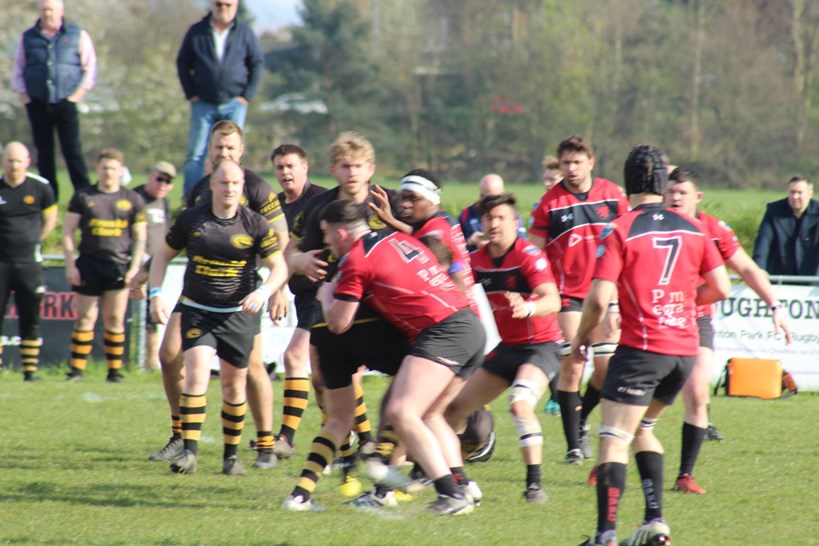 For once Northwich were clearly second best against a determined Broughton Park side still in danger of being dragged into the relegation fight. This season has taken its toll on the blacks with Director of Rugby Martin Poste having to reshuffle the team due to injury both prior and during the match.

It didn’t take long before the home side took the lead. Having been awarded a penalty BP opted for a line, from which they started a drive for the line. The ball was moved to the mid-field where a lack of concentration allowed BP to exploit a gap and score a converted try. With just 5 minutes on the clock it was clear the blacks would be in for a difficult afternoon. On the 12th minute the home side scored a second try showing ambition in attack. The extras went begging. After 25 minutes a Baldwin penalty got the blacks of the mark At this point Northwich began to make inroads into the match and on the 33rd minute were rewarded. Man of the match Sam Naylor collected the ball from the base of a scrum and set up a series of carries which were eventually finished off when Collins scored a good try. Baldwin added the extras and narrowed the lead to just two points. However this recovery did not last long. In a copy of the first score BP controlled a lineout and a neat midfield break created the opportunity for an unconverted try bringing the half to an end and giving the home side a deserved 17-10 point lead.

Within 8 minutes of the restart the BP scrum applied real pressure close to the Northwich line. The blacks were unable to stop the home tight forwards from scoring an unconverted try. On the 55th minute BP scored the try that would effectively end the contest. Showing ambition and skill the home side scored a converted try. The match became a stalemate until the 80th minute, at which point another home try was converted and the blacks looked down and out. However there was still time for more action. The next try came following a cross field kick to du Randt who stepped inside the defence to find Collins in support to score his second try. Baldwin added the extras and the crowd started to leave. From the restart the blacks went on a final assault which ended with Davidson crossing for another converted try ending the match with a more respectable score line.