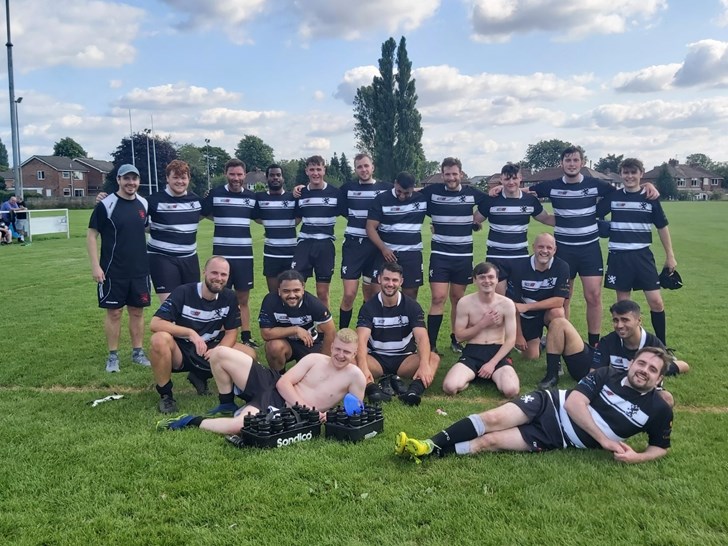 Out of the 18 man squad, 8 of these men, had been Colts at Park over the last 3 years; some of them coming up thought our Mini & Junior system, at various point from under 6 up.

A number of the 8 men, all under 21 age category have played for our Snr teams in previous seasons. Raffi Quirke was also part of this age group that came up though M&Js from Under 6 until his move to Sale Sharks Academy and then the Senior Squad.

Alexander Lloyd and Richard Loveday the age grade below, both played from the age of 6, with their fathers Mark Lloyd and Rob Loveday being their coaches; as well as being key figures in the club and regeneration of our Youth Section.

10 Years ago when Rob Loveday our Club Secretary took the post of Youth Chairman we had a Colts team but there was a big gap in teams below this. That Colts team included another player listed in Saturdays squad (Paddy Noon) and one of their coaches was (Dave Hanby) who was also listed in the team on Saturday.

Over the last 10 years the Youth Committee along with our wider volunteer coaching and officials cohort have put a lot of work into building and developing our Mini & Juniors Section.

It takes hours upon hours of volunteer time to run and keep a rugby team together, especially though junior years. Mark Lloyd has been the driving force with our Colts section, along with Saul Quirke to see the first of those Colts teams return to Park for several seasons; followed by Rob Loveday and Dave Pilkington originally in the age grade below, with the resent addition of Jon Rooke assisting with all the admin.

We now have 14 Teams from Under 18s Girls and Junior Colts down to U7s, plus an Under 6 Development Squad.

The hard work and dedication of the volunteers at our Club over the last 10 years makes it all worth while for moments like this. As Andy Mullen takes the Youth Chair position for the 2021/22 Season, we look forwards to seeing this player transition continue for the next 10 and beyond for both our boys and girls.
Tweet
Tweets by @broughtonparkfc